As tends to be the case in this post-ish-pandemic world of auto shows, the North American International Auto Show was a strange one. It was at least mostly indoors and thus not at the mercy of Mother Nature. And unlike that first Chicago Show following the initial pandemic shutdown, this one was all assembled before the media arrived. Even with a much thinner show floor, the Detroit Auto Show still gave us a number of noteworthy reveals.

Now, full disclosure, the rules for our Detroit picks were made a little more flexible, since some of these vehicles were revealed a little before the week of the show. But we still focused on vehicles that were making their show debut, and were actually present on the floor. Sadly, that means we had to leave out the Jeep Recon and Wagoneer S electric SUV concepts. Odds are, those would’ve made it into our list of the top five if they had actually been on display. Now, on to the winners.

This was an easy one. While there’s nothing so remarkable about the Willys that it makes this package a must-buy, it’s nice to see another model available with the 4xe powertrain. Just one question, though: Where was the Recon? – Byron Hurd

As a fan of the K5 and S-10 Blazer generations, I was a bit bemused when the current-gen crossover came out … until I drove it and realized how good it actually is. Now that there’s a Blazer EV incoming, I feel like I can become a true fan again. And there’s a lot for fans to appreciate: FWD, RWD and AWD versions, and even a 557-horsepower SS variant. In a lineup of practical, Ultium-based Chevy utes, it’s good to see an attainable product that enthusiasts can get behind — along the lines of Ford with its Mustang Mach-E — while we wait for an electric Corvette. — Senior Editor, Green, John Beltz Snyder

In a poignant press conference with the Spirit of Detroit statue in the background, Chrysler sent its flagship 300 out properly with a 6.4-liter Hemi V8. Stellantis design chief Ralph Gilles articulated the car’s successes — its many awards and sterling reviews from its early days — and the cover came off with a veritable 300C hot rod on display. One more time, the 300 is at full strength. To be clear, this isn’t the 300S with an available 5.7-liter. This is the 392 hooligan with 485 hp that looks and sounds the part. While the 300 has languished in recent years, it’s hard to understate just how much the sedan meant to DaimlerChrysler and the Chrysler brand 17 years ago. It gave the company an edge with enthusiasts and luxury car buyers, and a swagger that General Motors and Ford didn’t have at the time. From a design and performance perspective, it was unmatched in its day. With plenty of LX fans and owners in attendance, Chrysler kicked off the Detroit Auto Show with a deserving salute to to one of its icons. – Editor-in-Chief Greg Migliore

While it may not be the most glamorous car on the floor at Detroit, the Equinox EV is probably the most important. It’s an EV with an impressively low starting price around $30,000, but that isn’t a tiny hatchback. It offers impressive range between 250 and 300 miles. And amazingly, it even looks good, particularly in the cheery blue and white paint scheme on the display model. This is a real look at the mainstream future of EVs, and it’s looking good. – News Editor Joel Stocksdale

The new Mustang hits all of the high notes for the car’s large and passionate fan base. A V8? Check. Familiar styling? Check. A manual transmission? Check. This is all good. I personally liked the more retro interior in the outgoing car, but this new digital one will hold up better as the decade rolls on. Plus, using a clever appearance setting you can make the gauges look like the ones from Fox-body era. This is likely it for the ICE Mustang, and Ford played to the car’s strengths. With the Challenger done next year and the Camaro’s future uncertain, Ford’s long-running pony car may end up as the last one standing. – Editor-in-Chief Greg Migliore 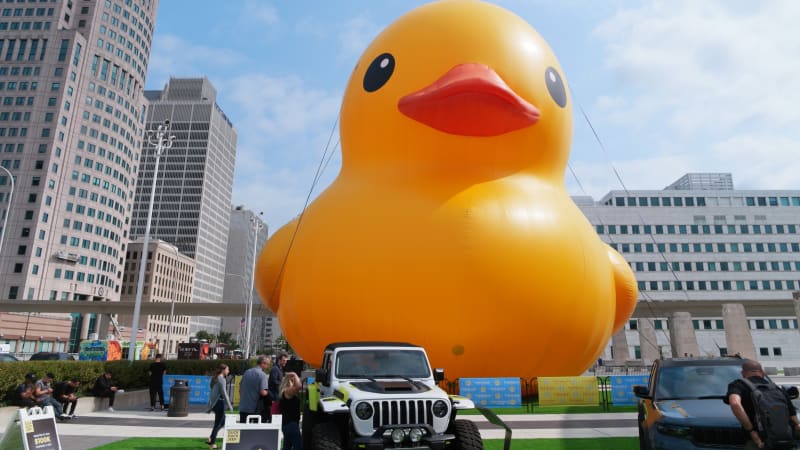 Honorable Mention: A duck, dinosaurs and a president (oh my!)

We can’t not shout out the other notable things at the show this year. The building-sized inflatable duck outside the convention center is literally impossible to miss. It’s like the event is under attack by the cutest kaiju. The reality of the situation is that the show is actually under siege by all variety of large (if not building-size) plastic dinosaurs. A bunch of raptors (or raptor-looking creatures) have set up shop in a sitting area behind the Ford Bronco demo zone. Yes, some Ford Raptors have slipped in among the legged ones. And of course President Biden made an appearance. Most of us only saw the added metal detectors, Secret Service agents and barricades put up to keep him safe and moving around the show. One thing’s for sure, we’re not going to forget the 2022 Detroit Auto Show, though maybe not for the reasons we, or automakers, expected. – News Editor Joel Stocksdale

After four weeks at the top the Redmi...

Numerous studies over more than two decades have...

After four weeks at the top the Redmi...

Numerous studies over more than two decades have...