The MateBook X Pro has always been Huawei’s premiere laptop – more capable than the fanless MateBook X, far sleeker the more powerful 16-inchers in Huawei’s range, and better than most other laptops on the market.

It started out as Huawei’s MacBook Air competitor but has evolved into a class of its own and has been almost unmatched in it, pound for pound.

The Core-i5 model ships with a 65W charger. Both are Huawei Super Charge certified but will supply most PD fast charging devices with the correct combination of amps and volts. 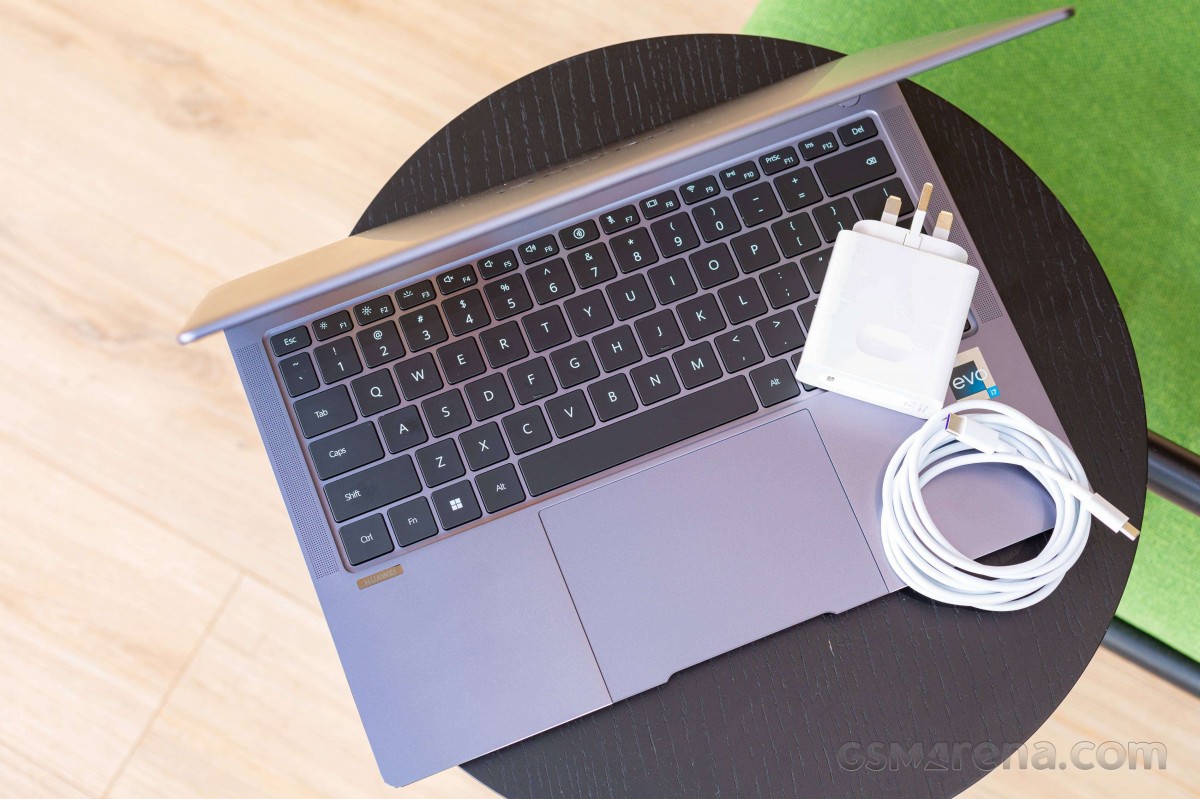 The MateBook X Pro 2022 is the biggest update to the lineup since its inception in 2017. This year’s model retains the 3:2 aspect display, but at 14.2-inch, making it the first in the series to move past the 13.9-inch diagonal, and the panel refreshes faster at 90Hz. Also, the display is rated brighter at 500 nits.

There are two USB-C ports on each side – that’s one more port than the outgoing model, and the touchpad has grown, now edging over the rim of the keyboard deck. There’s also a webcam in the proper place – above the display, not hidden under a secret button on the keyboard.

Now that we’ve covered how the MateBook X Pro 2022 improves on its predecessor, let’s take a deeper dive into its design and build quality.

The Huawei MateBook X Pro 2022 comes in White, Ink Blue, and this decidedly purple Space Gray shade we have for review. Sadly the lovely Emerald Green isn’t on the shelves this year. 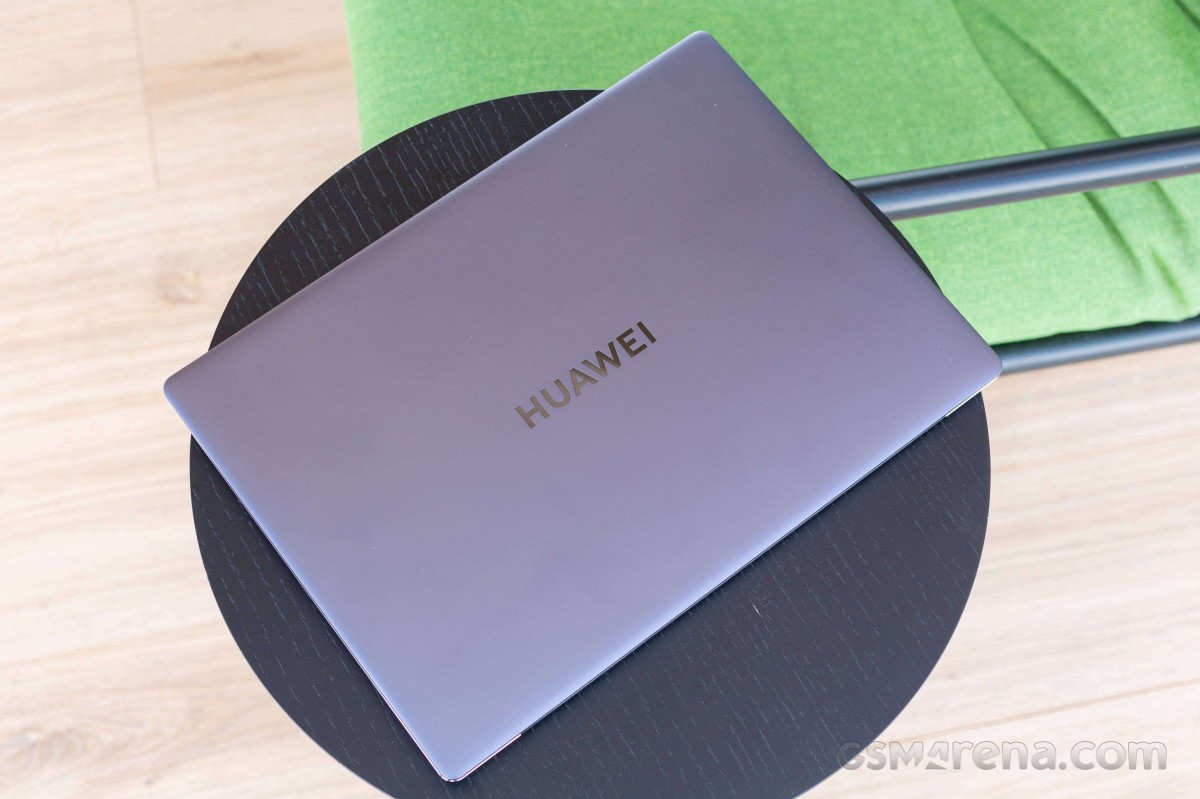 It has, for the most part, retained the full-sized keyboard of its predecessor. As before, the arrow keys are bunched together.

Key travel is good at 1.5mm and typing is enjoyable on this combination of chicklet style and good size, as it was last year.

The keyboard is still flanked by speaker grilles and there’s a round power button-slash-fingerprint reader in the upper right corner. 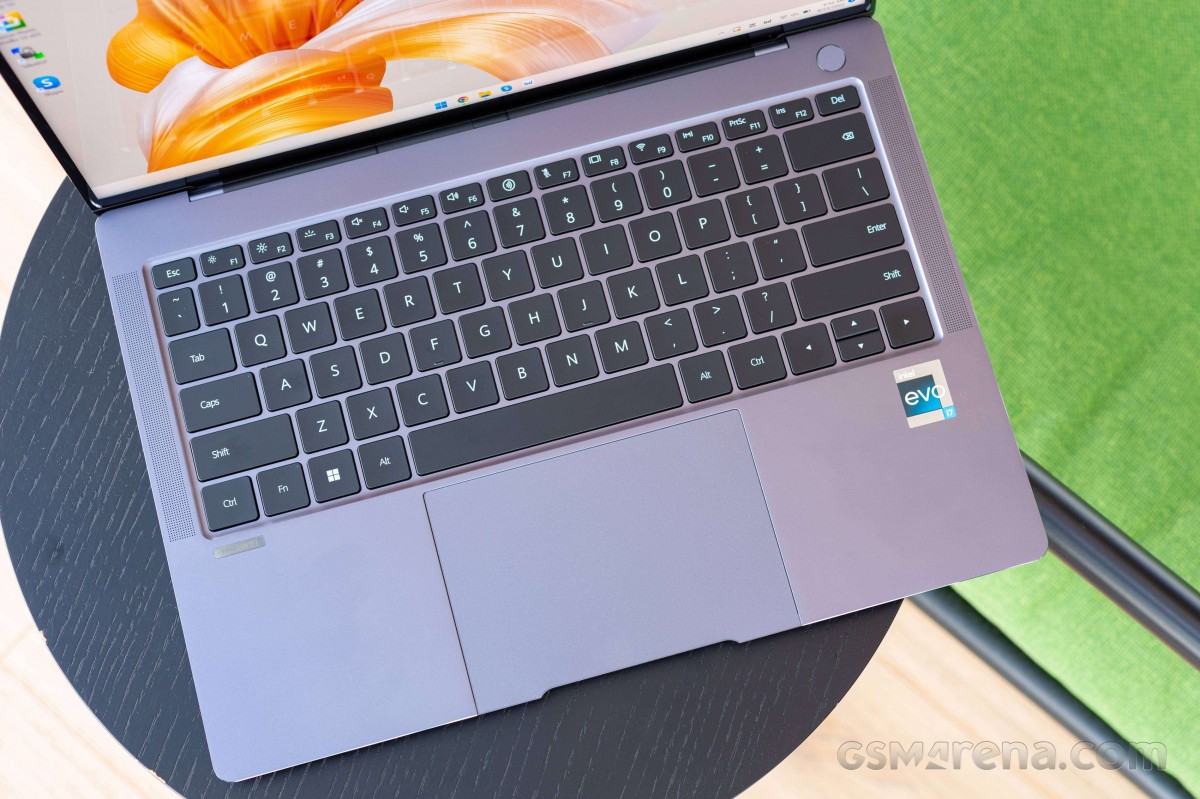 There’s a small Huawei plaque under the keyboard that’s new on this year’s model. Also new is the bigger touchpad. Huawei calls it the Free Touch touchpad and it’s solid state, meaning that any clicks you feel are vibrations from a motor underneath the glass.

You can tune the vibration strength as well as the sensitivity of the touchpad. There are intuitive gestures you can do as well – taking a screenshot by knocking on the touchpad twice with your knuckles, adjusting the brightness and volume with swipes on either edge of the touchpad, and closing an app by pressing in the top right corner. Learn these and you’ll speed up your workflow immensely. 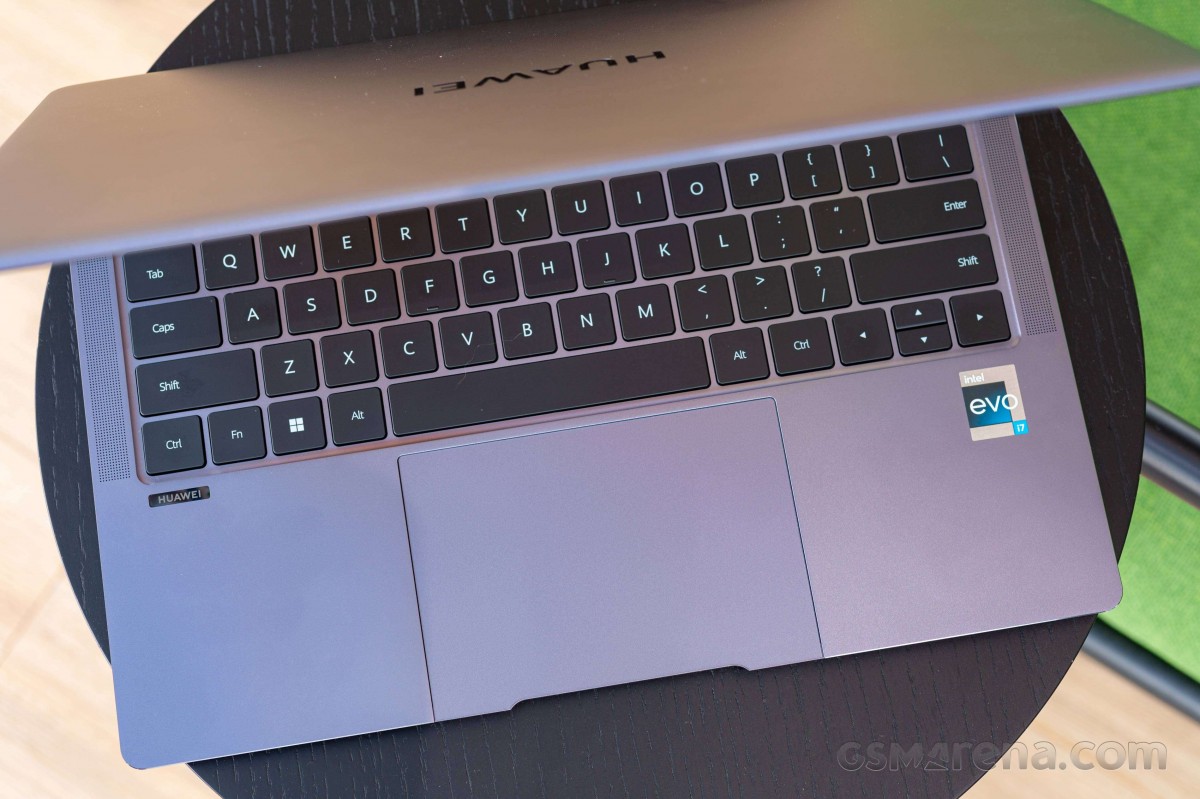 The touchpad spills over to the edge of the frame of the MateBook X Pro 2022, creating a lovely infinity pool effect. It doesn’t hinder opening and closing, which can be done with a single finger. The four microphones are facing you, underneath the touchpad. 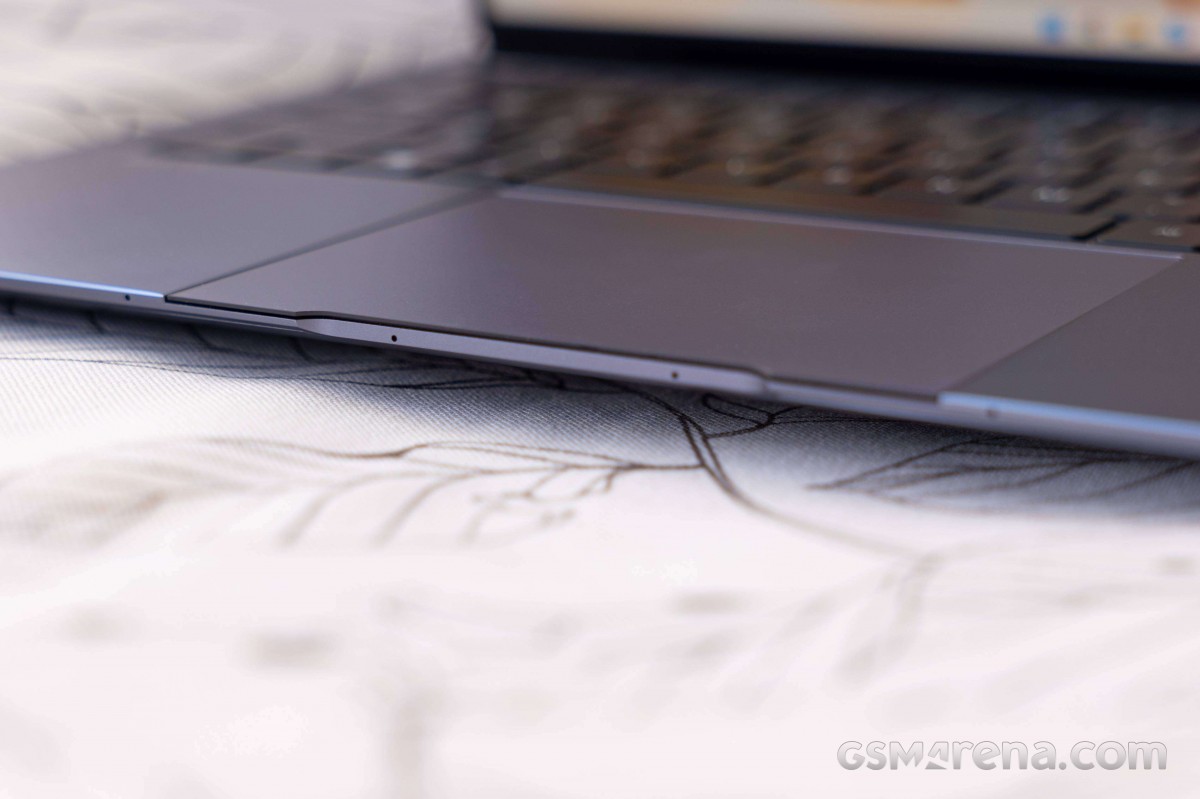 The six-speaker array on the MateBook X Pro 2022 sounds sublime. These are, by far, the best laptop speakers we’ve had at HQ, outside of the MacBook Pro 14’s. And it’s closer than you’d think.

We measured around 88dB at arm’s length but the sound quality is what’s impressive. Mids are pronounced and crisp but there’s also some solid, quality-feeling rumble from music, that we were unprepared for from a laptop.

Huawei Sound allows you to optimize the quality through three settings – Smart Optimization which balances detail and bass, the self-explanatory Ultra-bass, and Sound Turbo, which simulates spacial audio. 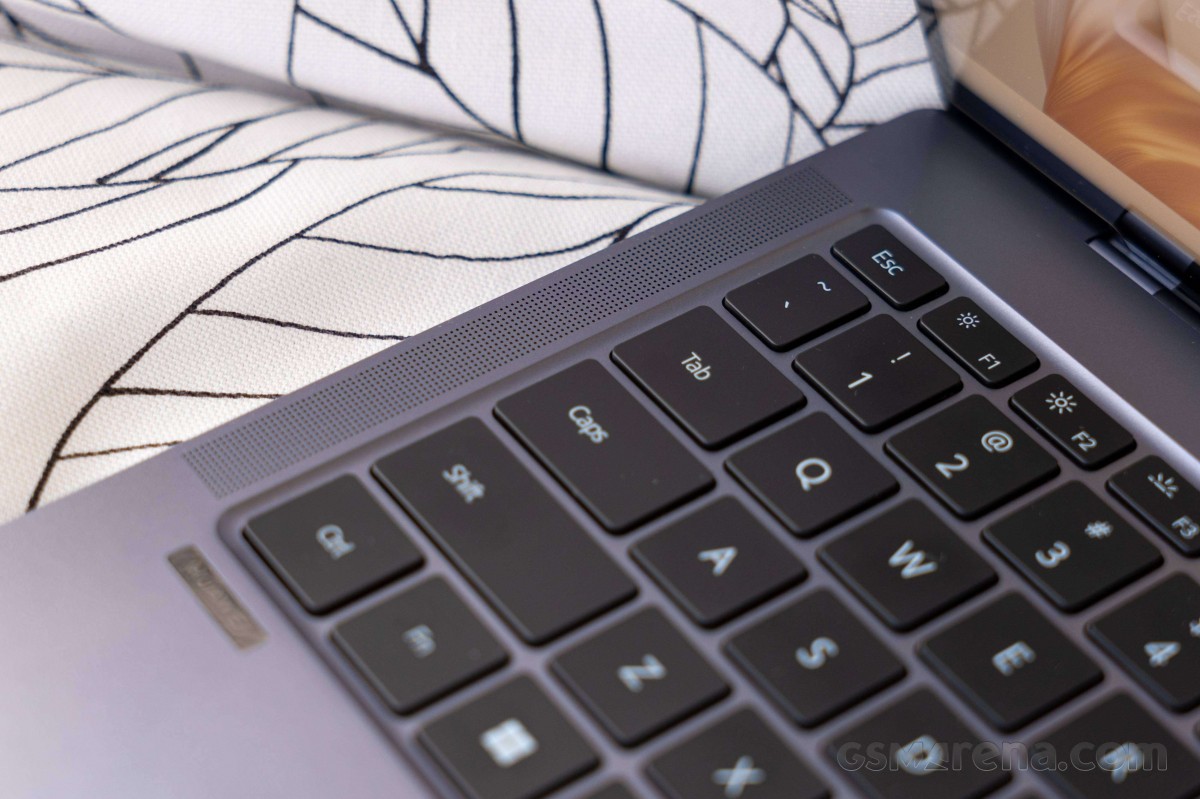 The MateBook X Pro 2022 doesn’t compromise on biometric options – you get a fingerprint scanner inside the power button and infrared face scanning above the display. Both are excellent for different reasons – the fingerprint scanner supports caching so it will wake up the laptop and log you in with a single tap, while the Windows Hello camera is one of the fastest we’ve used.

The camera itself has 720p resolution and supports Huawei’s suite of virtual backgrounds. You get to pick between Office, Caffe, Meeting room among other and you can also apply a Beauty filter. There’s auto-centering, which leverages the wide field of view to keep you in the center. 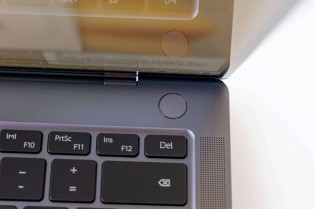 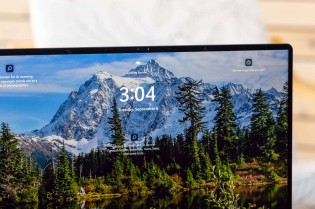 There are a total of five ports on the Huawei MateBook X Pro 2022 – on the left, a 3.5mm audio jack and two USB-C’s; and two more USB-C’s on the right. The two USB’s on the left are 40Gbps Thunderbolt 4, while those on the right are non-Thunderbolt compliant, but all four ports support charging, data transfer, as well as display connectivity.

What’s convenient is that you can charge the laptop from any of the four USB-C ports at the fastest Super Charge speed. 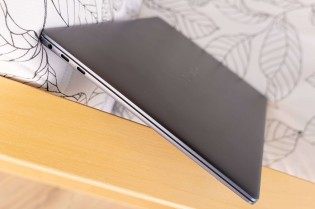 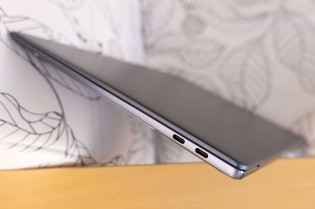 All USB-C on both sides, no USB-A

The panel is rated at 1.07 billion colors with a 1500:1 contrast. It supports the DCI-P3 and sRGB color gamuts and is VESA DisplayHDR 400 certified to deliver HDR content at up to 400 nits. It’s also a 10-point touchscreen.

This year’s display is rated at 500 nits, up from 450 nits on the previous model. But while last year’s model outdid its rating by 30 nits at 480, the MateBook X Pro 2022 scored a whopping 580 nits at the center. It got down to as low as 500 nits in the corners, which isn’t perfect uniformity but you’re unlikely to notice. Suffice it to say this is one very bright display.

The only thing letting this screen down is the higher-than-average reflectivity. You can see any sort of light source reflected on the glass to the point where it can become a hindrance. It diminishes the bright panel’s performance outdoors but is an issue indoors as well. 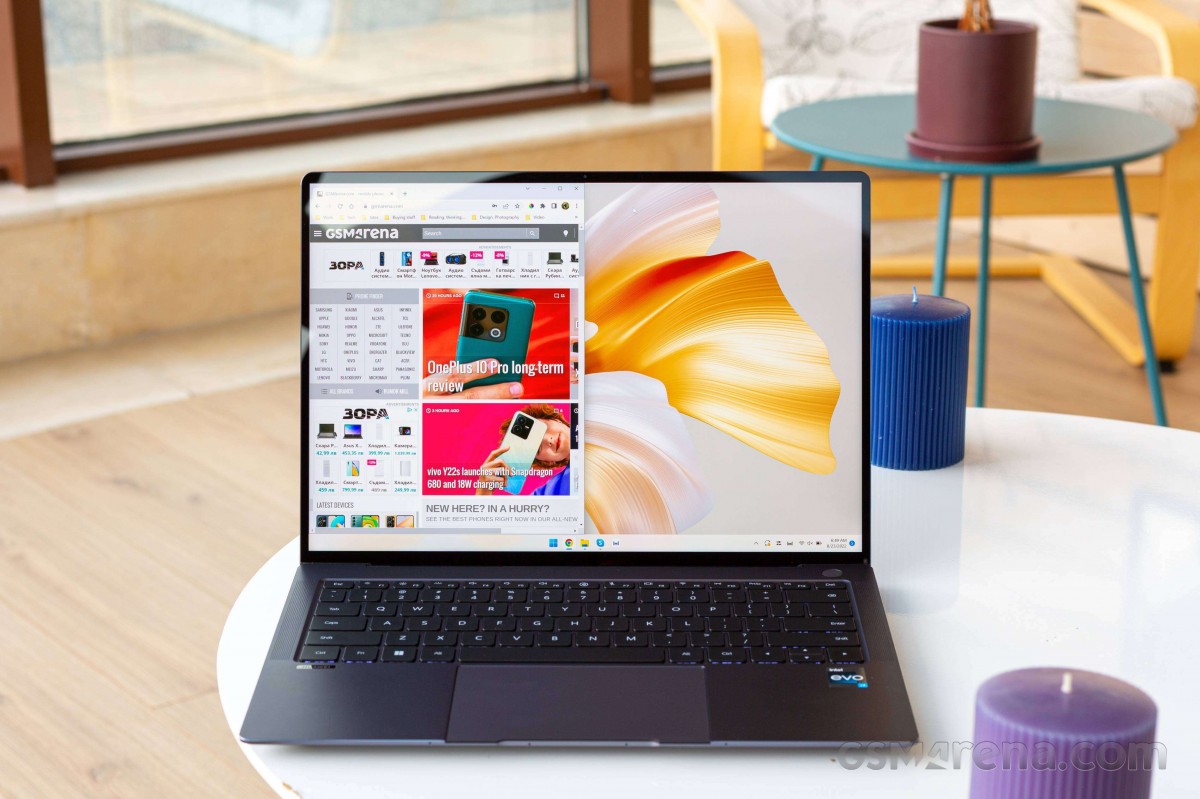 Huawei enables panel settings for its most-advanced displays and you can choose whether the screen is in the more vibrant DCI-P3 or sRGB. Selecting sRGB tones down the display to 8-bit and lowers the contrast and saturation, compared to the 10-bit DCI-P3. DCI-P3 has a 26% wider color gamut in comparison.

We love this feature because it makes it a whole lot easier to choose the right setting for your needs. You can choose sRGB for photo editing and DCI-P3 for video editing, or watching a movie. 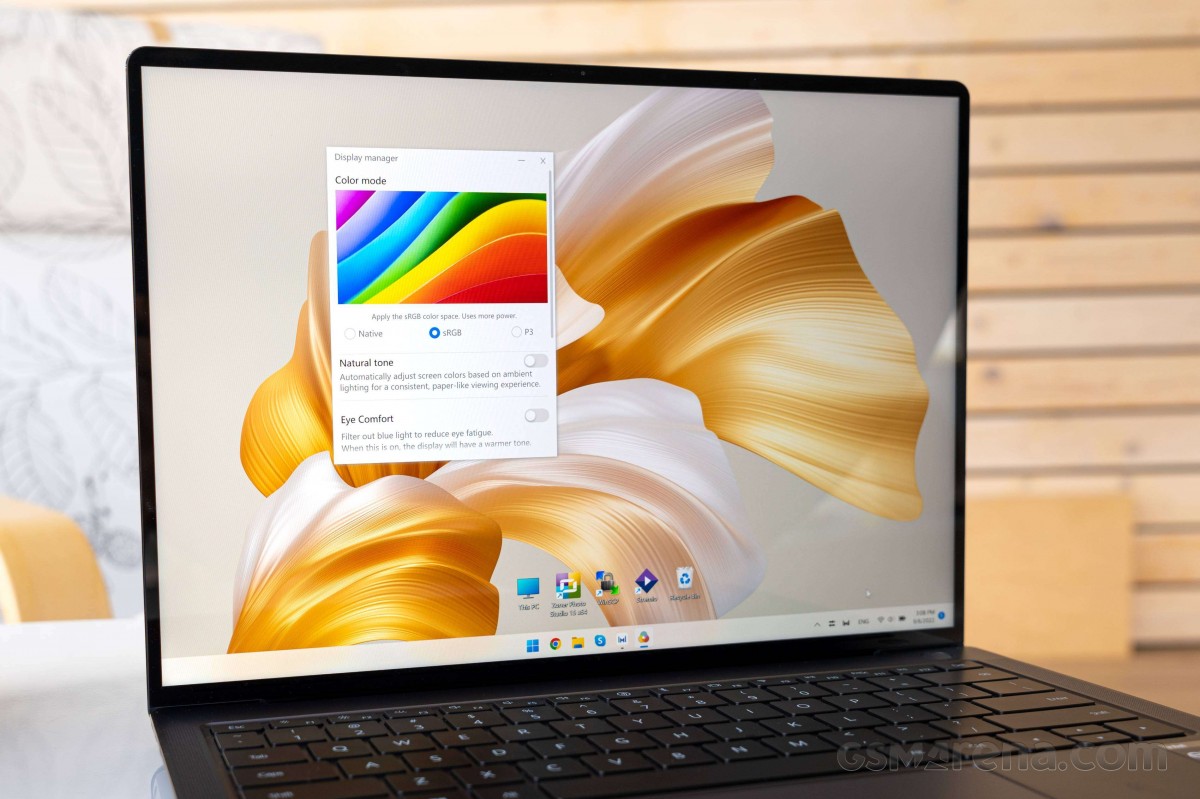 Huawei’s PC Manager app is a perfect companion. It encompasses all of the special settings and features like Huawei Sound, the camera settings, and Huawei’s Free Touch touchpad, but it also automatically updates the drivers and keeps the machine running smoothly. 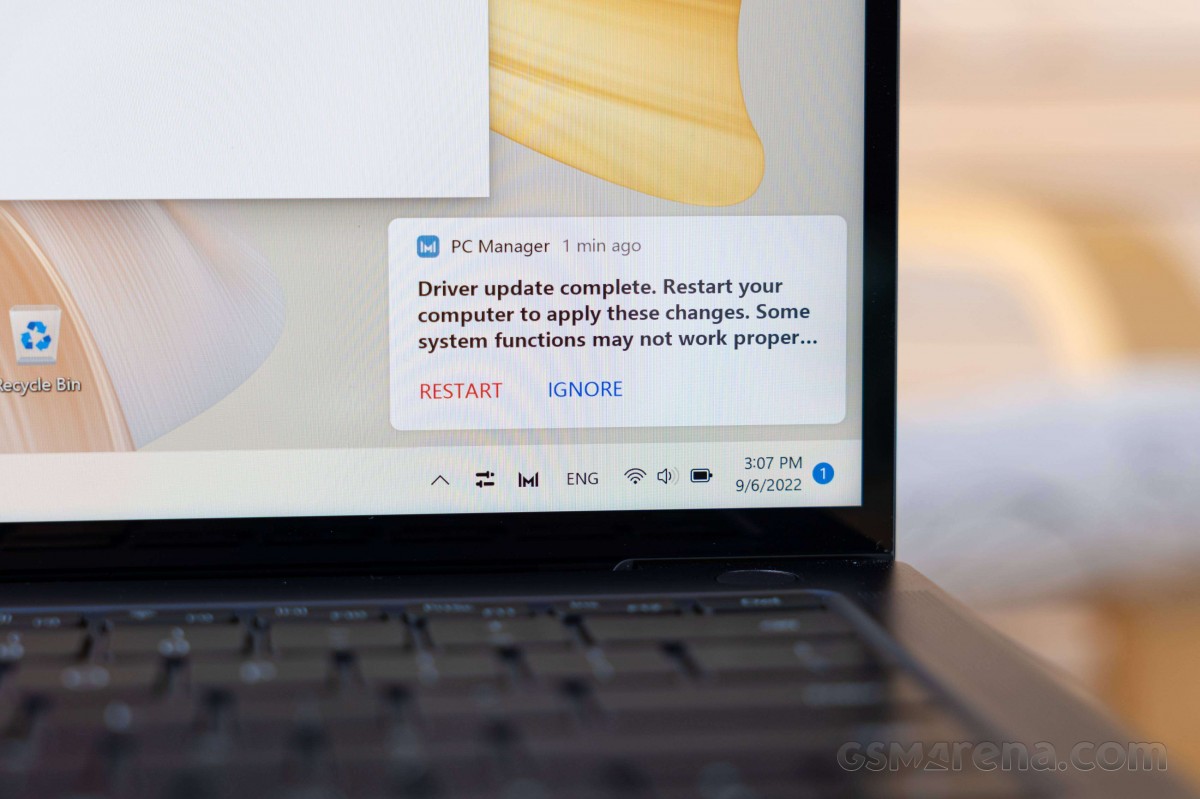 It’s also where you choose a performance profile, with a choice of Balanced and Performance.

This year’s Intel processors have adopted the big.LITTLE architecture of most smartphone chips, and Apple’s ARM-based M1 and M2 processors. You have two clusters of cores – performance cores and efficient cores.

The GPU is the same Intel Iris Xe G7, which can handle light gaming and photo editing. There’s no discrete GPU option on the MateBook X Pro 2022. 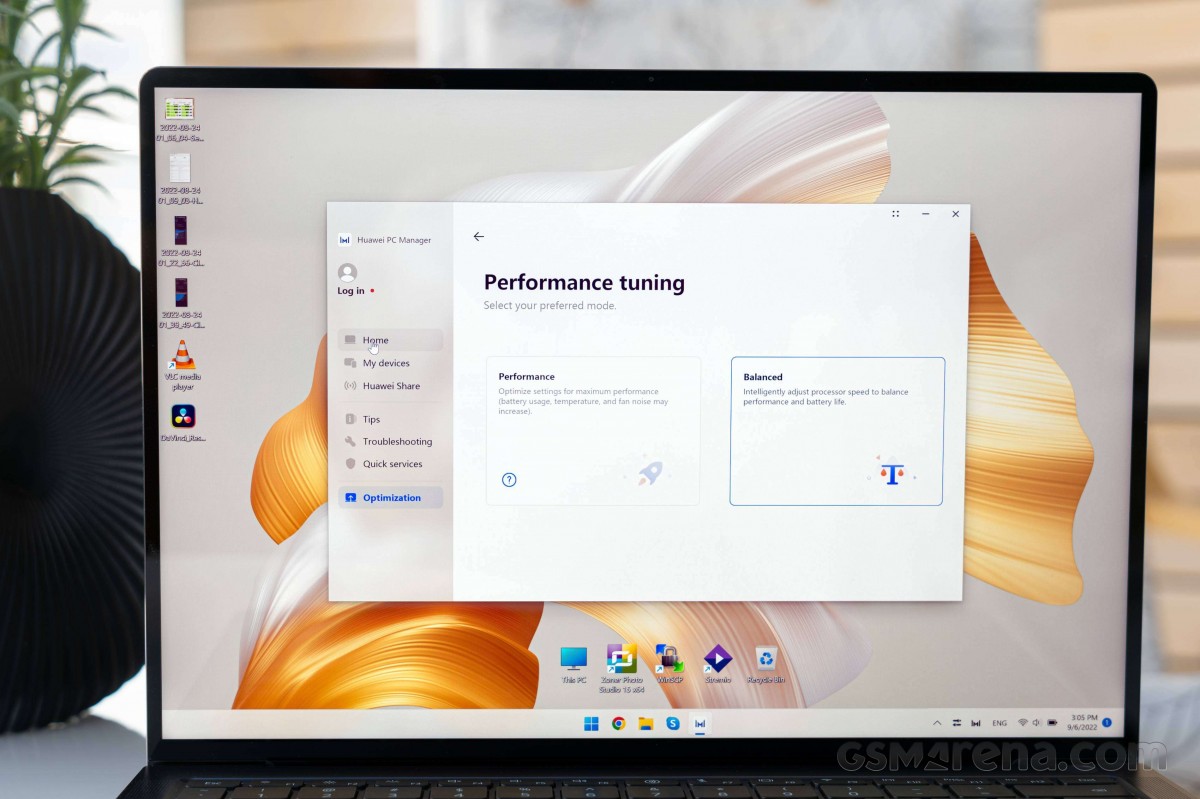 Compared to its predecessor, the Huawei MateBook X Pro 2022 scored 18% better in single-core and 49% better in multi-core in Geekbench. It’s a great example of the new architecture’s potential and its performance leap over 11th-gen. 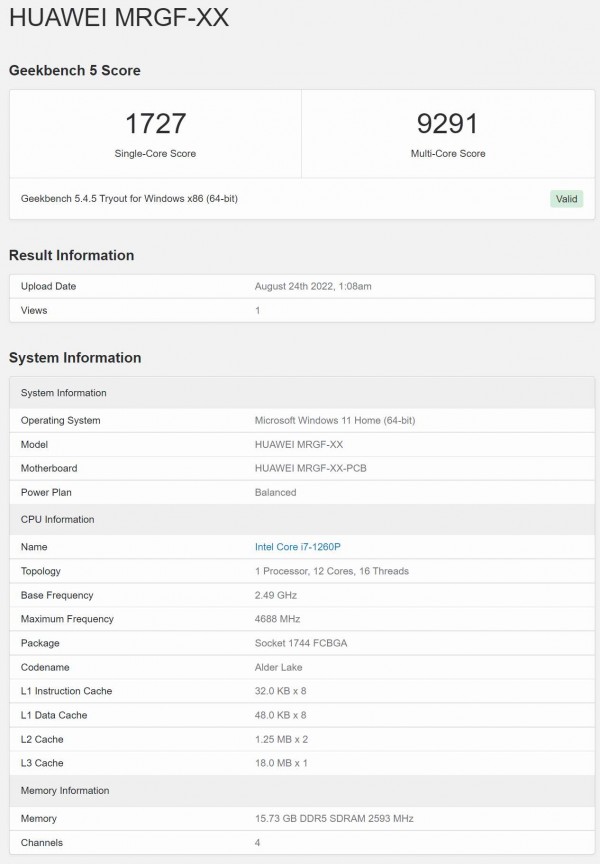 In Cinebench R23, the single-core score is 10% better than the 11th-gen Core i7 and 30% better in multi-core. The multi-core and multi-thread performance bump will be most felt in apps like Photoshop and video editing suite DaVinci Resolve, where computing is more important than graphics hardware.

One letdown of the MateBook X Pro 2022 is the SSD. It’s a 512GB SK Hynix PCIe 3.0 SSD that scored respectable numbers but is a generation old for the MateBook X Pro 2022’s motherboard. You could enjoy nearly double the speeds if you swap the preloaded SSD with a PCIe 4.0-class unit, like the one we had in our Honor MagicBook 14 2022 unit. 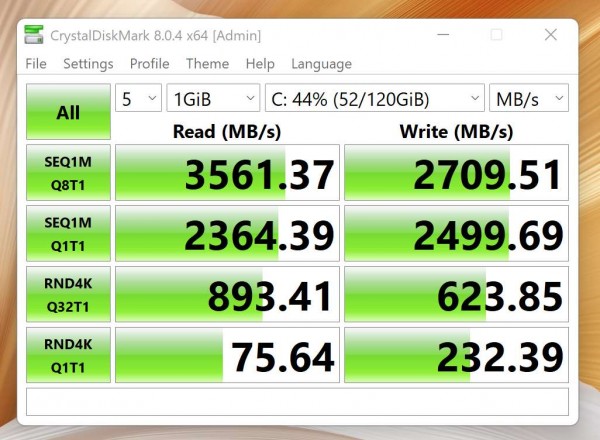 The Huawei MateBook X Pro 2022’s thermal performance is on par with that of its predecessor – at peak load, we measured 42°C at the center of the keyboard – not something you’ll notice under normal use.

When plugged in and in the Balanced setting, the MateBook X Pro 2022 will ramp up for a brief stint at around 3.0Ghz and then throttle down to 1.7GHz where it stays for as long as you need it to. The laptop was warm in the center and under the display but the touchpad and keyboard deck were cool. The fans were almost inaudible in an office environment.

When plugged in and Performance mode things are a little different. After the same peak the laptop was maintaining the higher 1.9GHz-2.0GHz speeds with a slight increase in fan noise and warmth. This is the mode you should enable if you need maximum performance.

The i7-1260P couldn’t sustain the same level of performance when the laptop was unplugged. It dropped down to 1.4GHz with the occasional spike up to 1.7GHz. The upside is that in this scenario, the fans are much quieter and the laptop never reached 40°C.

Huawei has tuned the MateBook X Pro 2022 to be a refined office laptop – a noticeable detriment to the potential of its 12th-gen Intel processor. However, you can still unlock some reasonable performance when you plug in and enable Performance mode (Fn+P or through the PC Manager app). 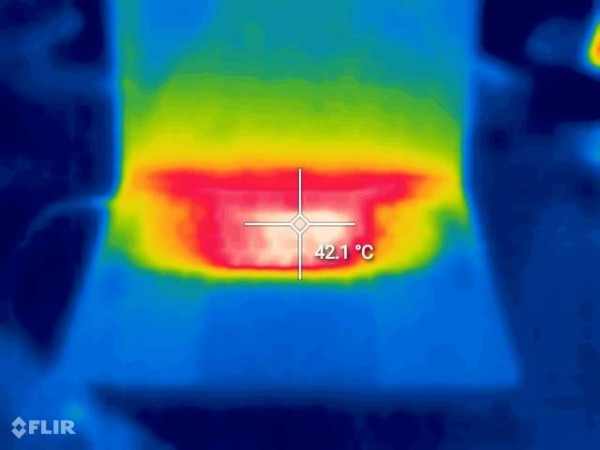 The Huawei MateBook X Pro 2022 comes with a 60Wh battery, slightly bigger than its predecessor’s 56Wh. However, it scored lower in our continuous browsing test – 6:00 hours of continuous browsing at 100% screen brightness and 8:30 hours at 50% screen brightness. Compared to the 2021 model’s 8 hours at 100% brightness and 12:30 hours at 50% brightness. The older laptop could score better due to a combination of the dimmer display and less-powerful processor.

The MateBook X Pro 2022 achieved 5:30 hours of continuous YouTube streaming at 50% brightness and 50% volume – good, but not the best in this class.

Those are among the best laptops in this category but there are other, AMD-based ones as well. You can find a cheaper device if you’re willing to look at older models with Intel’s 11th-gen or AMD’s 5000 series processors. Huawei’s own MateBook X Pro 2021 is wickedly-priced at €1,099 at the moment.

Last year’s MateBook X Pro 2021 stood taller than its competition on the shoulders of its excellent screen and unmatched design and build quality. It was almost impossible to match it for the price. This year the competition has caught on a bit – more and more laptops sport the kind of svelte design and blistering screen brightness as the MateBook X Pro.

All of this leads to the question – is the MateBook X Pro 2022 a worthy successor to the great lineup? And our answer is yes, absolutely. It’s a special laptop from every angle. It has a very bright, crisp, and seamless display, great keyboard, superb touchpad, excellent specs and ports, and good battery life. You will absolutely be happy owning one.

But then comes the harder question – is the MateBook X Pro 2022 a great deal? We’d say no. It certianly isn’t €1,100 better than its predecessor. It’s often how thing work with latest cutting-edge technology, isn’t it? But while stocks last we’d get the superb 1-year-old model and go on a vacation with the rest of the cash. Yolo!

Previous articleNews Briefs from around the World: September 2022
Next articleBuilding Infrastructure Platforms