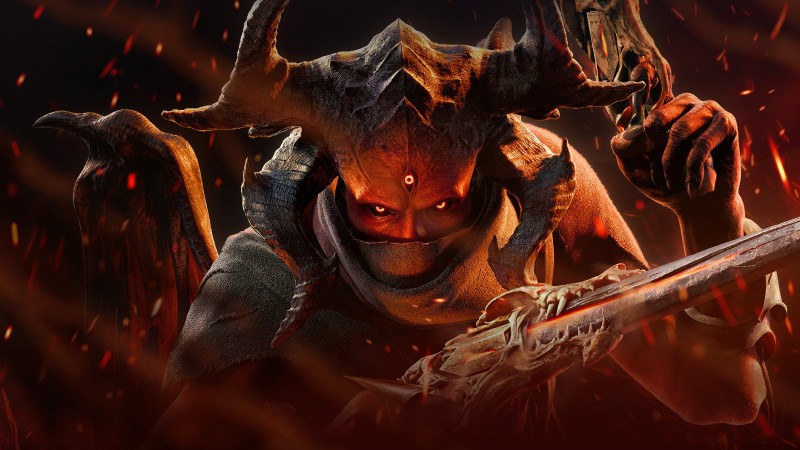 Metal: Hellsinger knows precisely what it is from the second it begins: a love letter to fast-paced first-person shooters, especially Doom, and a tribute to metal music and the culture surrounding it. It’s a no-frills shooter that asks, “What if you had to blow bodies to pieces to the beat of a metal album made by genre greats?” It excels at answering that question. It’s not perfect – the bosses are uninspired at times, and it could use an extra dash of variety in combat design – but my criticisms mattered little to my overall enjoyment of my 11-hour playthrough. What the game gets right far outshines what it doesn’t, and the developer, The Outsiders, has created what I hope is just the start of a new FPS franchise set in Hell.

Metal is the name of the game here, literally. Music plays throughout your experience, whether it’s in the game’s fantastic campaign that takes you through realms of Hell or its trials, which unlock sigils used to strengthen your loadout during the story mode. If you like Trivium, Lamb of God, and other bands like this in the genre and guns with a fiery kick, Metal: Hellsinger is already worth the price of admission. I gunned down a massive skeletal boss to the beat of a near-operatic song backed by iconic vocals from System of a Down’s Serj Tankian. I ripped through hordes of enemy mobs and behemoth demons to the rhythm of Arch Enemy’s Alissa White-Gluz’s death-metal melodies. It was as enthralling as it sounds, in no small part, thanks to precise and punchy shooting mechanics.

You use one of six different weapons to attack hundreds of demons, and the game rewards you with extra damage if you fire each bullet in perfect match with the on-screen metronome that doubles as your reticle. Streaks increase your damage output and score modifier. What’s unique about this streak counter is that each new level adds a new layer to the music track. At 2x, you might hear a bass rumbling and a guitar’s subtle whine, rearing for what’s to come. At 4x, the drums might kick in. Reach 8x, and the song begins to roar, missing just the vocals, which complete the track at 16x.

Climbing from 2x to 16x, made easier by streak multiplier pickups littered throughout a given stage, remained as exciting the umpteenth time as it was when I first did it. It feels like bringing a song to life, like a producer, except you’re doing it with weapons that rip Hell’s demons to pieces.

All of this is happening because of The Unknown, the playable character in Metal: Hellsinger, banished to the deepest realms of Hell where only ice and lowly demons remain. The Unknown progresses from the iciest domains to the fieriest alongside a talking skull voiced by Troy Baker. He brings a southern drawl that matches the game’s almost Western-like tone, all to find and kill The Judge, a slithering ruler losing her grasp on Hell, excellently voiced by Jennifer Hale.

There’s not much else to the game besides this campaign, but that’s okay because what’s there is outstanding. There are nine levels and 21 associated Torments that will test your mettle with time trials that task you with killing enemies a certain way using specific weapons and methods. There’s also an in-game codex for additional Hell-related information and extras that let you listen to the game’s tracks, but that’s it. Metal: Hellsinger is short and sweet, but it ends at exactly the right time when it reaches the climax of both its story and its built-in metal album.

I have minor gripes with the game, like its Torment time trials, which either feel cheap and unfair or brilliantly designed in an almost puzzle-like way, and its boss and combat design, which could use a touch more variety, but these critiques are barely worth mentioning. My admittedly small criticisms mattered very little to how much I enjoyed playing Metal: Hellsinger.

I likely won’t remember my minute frustrations with the game a few months from now, but I will remember “Dissolution,” a Two Feathers track with cathartic vocals from Bjorn “Speed” Strid of Soilwork, the realm of Hell known as Nihil, and the way my shotgun obliterated waves of enemies there. I’m so glad Metal: Hellsinger ends with the promise of more to come because I already want more from this series.