When Mikel Arteta steps through the walls of Brentford’s Gtech Community Stadium on Super Sunday, he will likely be reminded about the topsy-turvy nature of football management – and how far his team has come in a year.

Thirteen months ago, his Arsenal side went to Brentford on the opening day of last season and were humbled 2-0 – the start of three straight defeats to begin the last campaign.

Even after just one game and the season in its infancy, questions were being fired at the Spaniard’s direction about whether he was the right man to take Arsenal forward. Some of them were in Arteta’s own head.

“I doubted myself, I questioned myself,” he exclusively tells Sky Sports about how he felt when his side were rock bottom after three games. “This is part of a journey where – if you want to get better – you have to be self-critical.

“You have to have other people around you to tell you the truth and also have the humbleness to always be willing to get better, improve and explore other opinions and ways to do your job.”

Those critics were tough to handle. A wave of optimism last season turned into a “tsunami” of criticism, a metaphor coined by the Arsenal manager himself 12 months ago.

FREE TO WATCH: Highlights from Brentford’s win over Arsenal in the Premier League

“It was all building up a lot,” remembers Arteta about the tidal wave of negativity. “The way everyone reacted after the first game of the season, it was big.

“But that tells you the expectations of the football club you are in, how much passion and love here is for this club and how quickly you can turn things around. You have to be prepared for that and you have to be analytical about why things happen.”

So what did he learn? “One of the big lessons was: stay in the difficult moments, understand why things happen and move on.”

Fast forward a year and things are looking up for the Gunners. Top of the table after a positive start to the season, with Arteta named the Premier League manager of the month for August this week. From being full of errors at Brentford a year ago, Arteta’s side go back to west London with “no weaknesses” in their team – according to the club’s legendary former manager Arsene Wenger.

“It’s great to hear that from Arsene after being with him every single day!” said Arteta, with Wenger one of his earliest mentors when he decided to transition from playing to coaching. “But I see a lot of things that we still have to improve on and get better at. We are heading in the right direction but we can become much, much better.”

That was no more evident than in their last Premier League game against Manchester United, which ended in a 3-1 defeat. Many analysts are keen to notice the similarities between the Brentford match last season and the United defeat this term. Plenty of pre-match optimism, favourites for the match on paper, total control in the game but inefficiency letting them down in both boxes.

“Naive” and “a lack of maturity” were words associated with the Gunners at Old Trafford once again. But this week, Arteta is going back to the lessons learned at Brentford a year ago – using exactly the same messaging.

“After Manchester United, it was very simple,” he says. “I watched the game back and said to the boys: ‘We have deserved to win the game with the way we played – but we gave them two opportunities to do something they are exceptionally good at’.

“That was our fault – and then you have to move on.

“This is the game at the end of the day – it’s decided in various small fractions of time, moments and details that lead to a football result. 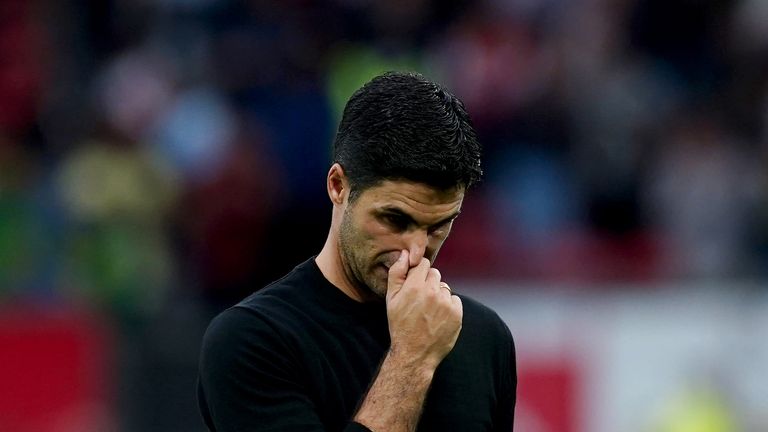 Mikel Arteta says his team need to improve on the ‘margins of error’ within the match to avoid results like their 3-1 loss to Manchester United.

“It can be completely different to what you have earned and our job is to earn the right to win the match. Sometimes it’s margins, errors or decisions that are not in your hands.”

Now Arsenal turn their attention to Brentford, who are proving to be a tricky banana skin for teams in this division. The Bees have taken points off Liverpool, Manchester United, Tottenham and the Gunners at their west London home since their top-flight return last year – and Arteta acknowledges the “any means necessary” approach to beat this Brentford side.

Of course, Arteta knows that – having put up Brentford striker Ivan Toney’s tweet mocking Arsenal from the defeat 12 months ago in the dressing room for February’s return fixture at the Emirates Stadium. The Gunners ran out 2-1 winners that day – and their Spanish manager wants more of the same.

“Every manager tries to motivate using anything we can with our hands to get the best out of our players and I believe in that moment that it was the right thing to do,” said Arteta about the Toney tweet.

“Hopefully this [Sunday] will be a very different story,” added Arteta while reflecting on this fixture a year ago. “But they [Brentford] have shown in the last few months that they can perform and get big results against big teams.

“We are aware of that and we are not the only ones to have suffered there and on Sunday they will try to do exactly that again.

“We have to prepare for that.”

Watch Brentford vs Arsenal live on Sky Sports Super Sunday this weekend from 11am; kick-off 12 noon.

Previous articleSix-Figure Passive Income in Just 4 Years!
Next article14 Tips to Stop a Power Outage From Draining Your Wallet

Google Chrome to mark non-HTTPS sites as ‘not...
ZippyByte