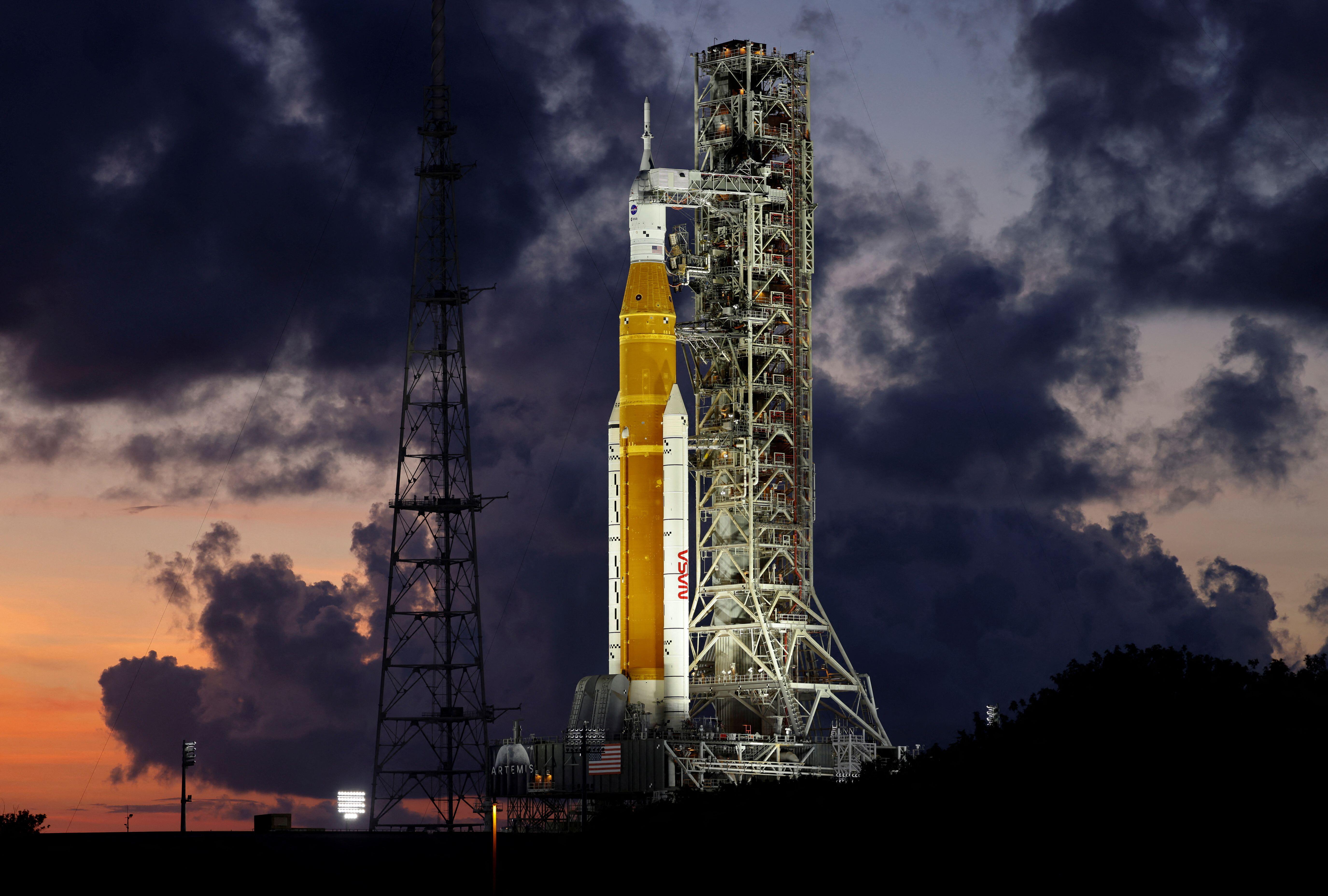 “We are going,” NASA declared in the days before the space agency attempted to launch its Artemis I mission, the first test of a megarocket called the Space Launch System (SLS) and a crew-rated spacecraft called Orion. Named after the Greek god Apollo’s sister, Artemis is NASA’s moonshot—the agency’s plan to return humans to the lunar surface and perhaps ultimately send them on to Mars.

But first, the SLS needs to get off this planet. And NASA’s first two launch attempts, scheduled for August 29 and September 3 at the agency’s Kennedy Space Center (KSC), failed. The next attempt is tentatively scheduled for September 27, with a potential backup date of October 2—pending a successful tanking test and permission to launch.

“What we’re seeing on the launchpad is actually rather typical for new launch systems when they first go into operation,” says Daniel Dumbacher, who oversaw the SLS’s initial development while he was at NASA and now serves as executive director of the American Institute of Aeronautics and Astronautics. “I’m not worried about this at all. It’s a delay, yes, but in the bigger picture of things, we are reestablishing the launch capability that this country gave up after Apollo.”

Now, as agency officials continue to troubleshoot the rocket, the rhetoric has changed somewhat: They’re quick to reiterate that Artemis I is a test flight and a risky one at that. The rocket is, after all, a new machine—even if its design is based on space-shuttle-era technology. And the spacecraft on top is new, too. If all goes well, the SLS will launch the uncrewed Orion capsule onto a looping journey around the moon—a prelude to a crucial test of Orion’s mettle when the homecoming spacecraft will attempt to survive a fiery high-speed reentry in Earth’s atmosphere.

The stakes are high. Together, the pair are over budget and years late to the launchpad, having already eaten some $43 billion in taxpayer dollars. And to some, NASA’s troubles launching this rocket aren’t unexpected—but for a different reason.

“I am not too surprised,” says Lori Garver, NASA’s former deputy administrator and a well-known critic of the Artemis hardware. “One of the reasons it’s not surprising is because decisions they made more than a decade ago locked them into this design that really was not focused on operability.”

The SLS and Orion are a knitted together Frankenmachine with parts built by multiple legacy aerospace companies—a result not of any mission-driven demand from NASA but rather of political pressure from influential congresspeople such as then senator Bill Nelson (now NASA’s administrator) to keep cash flowing into their district or state. The result is an unwieldy contraption relying on dated technology that is jokingly referred to as the “Senate Launch System”—and that, paired with Orion, carries an almost unfathomable projected cost of about $4 billion per launch. Even if the SLS gets off the launchpad, besides Orion and secondary payloads, the rest of the enormously expensive assemblage will not be recovered. Instead it will either be ditched in the ocean or left drifting through space.

That’s in contrast to companies such as SpaceX, which has prioritized reusable rocketry and has so far launched five rockets from Cape Canaveral since NASA rolled the SLS to the pad on August 16. The largest reusable SpaceX rocket currently in operation, the Falcon Heavy, has already flown to space three times; Depending on the specific mission profile and final orbital destination, under the most favorable circumstances the Falcon Heavy can hoist about two thirds as much payload as the SLS, with each launch priced at approximately $100 million.

“The companies who had expertise in these rockets wanted to keep the business, which meant convincing the policy makers to design it this way—even though everybody knew we had all these problems with these systems on the shuttle,” Garver says. “They’ve somehow thought taking finnicky, expensive parts of past programs and putting them together differently would be easy and cost efficient.”

The evening before the first launch attempt, which was scheduled for 8:33 A.M. ET on August 29, the “Space Coast” encompassing KSC and its surrounding region in Florida was already crowded with tens of thousands of gawking sightseers and hundreds of stressed-out space journalists. All eyes were on the SLS and Orion, stacked together as a 322-foot-tall white-and-ochre statue gleaming in floodlights at KSC’s Launch Complex 39, where the multihour process of fueling the rocket would soon begin. Hopes were high for the following day’s launch, but as the night went on, troubles rolled in, just as reliably as the rainstorms that dampen Florida’s overwatered lawns each afternoon.

First came a weather delay. Around midnight, the probability of a lightning strike near the pad was too high for the team to start fueling the rocket. After about an hour, the storms moved out of range, and tanking operations started. Gassing up the SLS means pumping some 190,000 gallons of cryogenic liquid oxygen and 538,000 gallons of superchilled liquid hydrogen into the main stage tank. It’s a delicate operation because cryogenic propellants are notoriously finnicky—and explosive.

Sure enough, teams soon detected a hydrogen leak at the base of the rocket—the same type of issue they’d encountered during a wet dress rehearsal and the same kind of problem that frequently delayed space shuttle launches: over 30 years, NASA’s space shuttles scrubbed on average about once per launch—often because of hydrogen leaks.

The smallest and lightest atom in the universe, hydrogen makes an excellent propellant, but it’s also a master of escape. “It’s a sneaky little molecule; it can find ways out of things,” Dumbacher says. “The challenge with it is: in enough concentration, it can be combustible in places you don’t want it to combust.”

The team pushed on and plugged the leak. Tanking continued. Then a crack appeared in the foam insulating the SLS core stage, but the team members decided it wasn’t a problem and kept going. They could not be so cavalier a short time later when sensors indicated one of the rocket’s four engines wasn’t cooling to the proper temperature during a procedure known as “chilldown,” which readies the engines for the cold shock of superchilled liquid hydrogen. Normally, teams bleed a small amount of the –423-degree-Fahrenheit propellant through the system to condition the four engines before blast off, but engine number three didn’t appear to be responding.

That was the showstopper. Launch director Charlie Blackwell-Thompson declared a scrub around 8:40 A.M. ET, with the huge countdown clock paused at T minus 40 minutes.

A few days later, NASA officials announced that the chilldown procedure had probably been going just fine. The team had enough data to suggest that coolants were flowing properly, and engineers decided that the sensor reporting an anomalously high temperature was probably just faulty. They would make a second attempt without fixing it. “Is part of the plan … to just ignore the sensor?” asked CNN correspondent Kristin Fisher during a briefing on September 1. “Yes,” answered SLS chief engineer John Blevins, “we will.”

“It’s not unusual to see instrumentation problems; it’s just one of those things the public is not used to seeing,” Dumbacher says.

Officials scheduled the next launch attempt for September 3, with a two-hour launch window opening at 2:17 P.M. ET. With Labor Day looming, the holiday weekend would draw even larger crowds—as many as 400,000 people this time.

Again, the problems piled on quickly. Tanking operations started on time, but officials discovered—blast it!—another hydrogen leak almost immediately. They tried to fix it by warming the fill lines and pressurizing them with helium, yet the leak was too large. After three times, it proved unfixable—and by 11 A.M. the team was already way behind in its time line. With the hydrogen tank only 11 percent full, Blackwell-Thompson again called a scrub.

“Every time we saw the leak, it was a large leak that immediately exceeded our flammability limits,” said Artemis mission manager Mike Sarafin during a September 3 postlaunch briefing.

But, also during that briefing, Sarafin told reporters the large hydrogen leak had occurred at the same junction where a manually entered command had produced an “inadvertent overpressurization of the hydrogen transfer line” and boosted pressures to two or three times higher than they should have been. As a result, he said, it’s possible the overpressurization damaged the seal at that junction.

“There was a sequence of about a dozen commands that were required, and it was simply the wrong valve was commanded,” Sarafin said. “This was a manual sequence, and it may have been the fact that we didn’t automate this particular sequence that could have been part of the reason that we had the inadvertent overpressure.”

As of publication time, NASA officials have yet to definitively link that error with the launch-terminating hydrogen leak. They’re still doing a “fault tree analysis” that will ultimately point to a root cause of the scrub.

“They’re really thinking through all the possible scenarios that could occur and then very systematically using the data and information they have to determine which fault was most likely to occur,” Dumbacher says. “They’re doing all the right things.”

But Garver says that even if the errant command didn’t cause the leak, it’s not good news. “At this point—whether that even leads to the leak or not—it’s a red flag,” she says. “You don’t send errant commands to overpressurize a line at this stage of the game. It’s a process; it’s a procedure. They said maybe it should have been automated—those are not ‘Oh, yeah, maybe we should have done that’ kind of questions on a $43-billion stack.”

NASA officials say they have now fixed several seals on the launchpad but have pushed back a third launch attempt from September 23 to September 27.

That timing still depends on two crucial things: first, a successful repair and tanking test, currently scheduled for September 21, and second, a waiver from Space Launch Delta 45, a unit of the Space Force that grants permission for all rocket launches on the Eastern Range. The SLS was only certified for launch through September 6. The batteries powering its onboard self-destruct system—basically a bomb designed to destroy the rocket if it veers off course and threatens a populated area—will need recharging, which can only be done at KSC’s nearby 526-foot-tall Vehicle Assembly Building (VAB).

Launching at the end of September would require Space Launch Delta 45, whose responsibility is public safety, to waive the recharge requirement. If that’s a no-go, NASA will have to roll back to the VAB and try for a mid-October window, a consequence of choosing to design a minimalist launchpad that doesn’t have the requisite charging capability.

“I don’t think there’s an appreciation for how some of the early decisions that were made and constrained by budget are actually manifesting themselves today,” Dumbacher says. In particular, he points to the pared down launch and the selection of cryofuels.

“I hear this talk about, well, you’re not using new tech. Well, I will also remind people that the laws of physics have not changed,” Dumbacher says. The liquid oxygen and liquid hydrogen system is “what Mother Nature has provided that we can use to meet our mission objectives. It has the energy required to get large systems and large masses and large volumes to orbit and on their way to the moon and eventually onto Mars.”

NASA’s latest human-spaceflight woes are coming at a fitting time: September 12 was the 60th anniversary of the speech in which President John F. Kennedy famously proclaimed, “We choose to go to the moon in this decade and do the other things, not because they are easy, but because they are hard.”

Sixty years on, however, for Earth’s most venerated space agency, perhaps the hardest part of reaching orbit is overcoming forces—political rather than gravitational—that keep it on the ground.